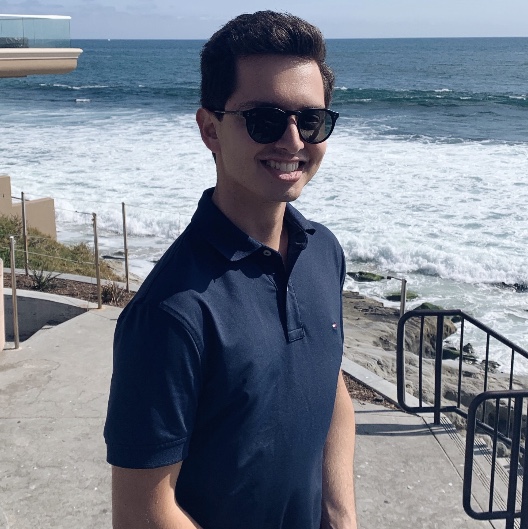 For Alex Guzman, show business was never about having your name in lights. But if that’s your thing? Well, he could definitely hook it up for you.

As a lighting electrician for The Laguna Playhouse, the Irvine Valley College graduate supports the show from behind the scenes, providing critical assistance to the lighting designer, from pre-production to final bow.

One day, he might be plying patch panels on Peter Pan. A week later? Backlighting Belle and The Beast. And while Orange County theater-goers may never see him in the spotlight, there’s always a good chance he’s standing behind it.

“It’s really creative and technological [rolled] into one,” explains Guzman, who was attracted to the career for its energy and versatility.  “It’s what I like to do… it’s really exciting.”

Guzman’s love for lighting began in high school. As a set-builder for his theater group, he also served as de facto lighting designer, setting up fixtures and running the control console for high school productions. He knew he was on the path to a dream career in technical theater. But until he encountered IVC, he didn’t realize it would be so well lit.

“I lived in Irvine, and I knew IVC was one of the few colleges to have theatre programs,” Guzman recalls.

But it was the IVCTheatre Arts department’s versatility that sealed the deal. With a plan to transfer on for his bachelor’s degree, he chose a focused, 18-unit Lighting Technician certificate, and was amazed at the depth of his program.

“I’m so glad I went there -- they have every department, not just lighting, but sound,” says Guzman, who has since gone on to pursue his bachelor’s degree at Cal State Fullerton. “You’ve got to know everything.”

It was at Irvine Valley College that Guzman’s technical skills began to catch up to his ambitions. He learned to use drafting techniques to design lighting plots – combining creativity and know-how to build blueprints for entire lighting productions. He picked up critical stage-lighting skills from instructors and colleagues with decades of experience in the Southern California live entertainment industry, most notably IVC instructor Crystal Shomph.

“She became my mentor,” says Guzman about Schomph, an independent lighting designer who also teaches Guzman in the Department of Theatre and Dance at CSUF. “She helped me through designs [and] taught me all the necessities I needed.”

Guzman’s IVC program included an internship class, which matched students with real-world opportunities with local theaters. As part of his internship with The Laguna Playhouse, he loaded lighting equipment, implemented instructions from the lighting designer, and during productions, manned the spotlights.

When the internship ended, he “just stuck with them,” accepting a paid position as a lighting electrician.

“I either run the lightboard or spotlight operators,” says Guzman, currently working on the Playhouse’s winter production of Peter Pan. “It’s about being creative, collaborating with others.”

Next up for The Laguna Playhouse is a holiday celebration musical, followed by a children’s show in January, and for now, Guzman is exactly where he always wanted to be. Currently, in the middle of a bachelor’s degree program in Technical Production at CSUF, he hopes to someday become a lighting designer in his own right, potentially traveling with a touring company before finding a home a master electrician in a theatre.

“Just trust your gut, do what you love,” he philosophizes. “It’s not about what industry makes a lot of money.”

When reflecting on his time at Irvine Valley College, Guzman is quick to credit his inspiring instructors and the real-world focus of his career education program. But most of all, he remembers the support he received as his career path became illuminated.

“They guide you every step of the way.”

Stage lights are bright, and so is your future, with a career education from Irvine Valley College. IVC offers four associate degrees and three career certificates through its Theatre Arts department. Learn more about Theatre Arts @ IVC!