Want to Turn a Passion for Music into a Career? Join the Chorus.

Want to Turn a Passion for Music into a Career? Join the Chorus. 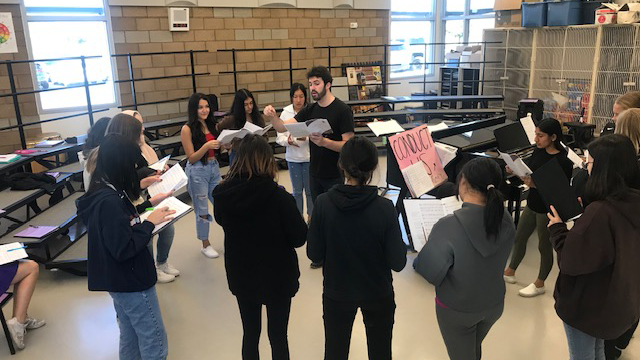 Adrian Rangel-Sanchez found more than just a career at Irvine Valley College. He found a voice.

A violinist since age four, and a piano player before first grade, music had always been a source of confidence for the Irvine native. At University High School, he gravitated toward vocal performance, thriving as a member of the choral ensemble, and even co-founding an a capella group: “The Footnotes.”

Then, as a senior filling out college applications, things started to change. With so much riding on that four-year choice, his future in music suddenly became a source of anxiety.

Rangel-Sanchez was “so stressed about college applications, trying to pick a university right away,” that he began to overthink his college planning. Even after his acceptance to UC Riverside, the tension remained: What if I make the wrong choice?

“I wasn’t planning on IVC [until] I realized it would serve me better,” says Rangel-Sanchez, currently succeeding as a music teacher and choral ensemble director at Portola High School in Irvine. “The best thing would have been to figure out what to do first – I would have saved myself a lot of stress.”

Irvine Valley College’s welcoming, exploratory atmosphere would provide the perfect remedy to Rangel-Sanchez’s college-induced anxiety. Though his initial indecision forced a late start, he was inspired by a meeting with IVC Music chair Dr. Matthew Tresler, who “pulled some strings” to admit him.

“He got me into classes a week late,” recalls Rangel-Sanchez, who felt instantly at home in the program, thanks largely to engaged faculty like Tresler. In fact, it was his professor that first inspired the idea of using his musical gifts to teach.

“He was the one who [told me]: ‘every great conductor is really just a great teacher.’”

The thought stuck with Rangel-Sanchez, and soon, he was on a mission to teach music. With his sights set on a bachelor’s degree from Cal State Fullerton, he committed full-force to studying and performing in IVC’s renowned music program.

“The fact that I could have a whole school day full of music classes…was a great thing,” says the teacher and choir director, currently in his third year at Portola High School. “I knew I wanted to conduct and direct musical ensembles [and] I had the guidance of my teachers at IVC.”

After auditioning successfully for Tresler, Rangel-Sanchez joined the Master Chorale – IVC’s highest-level vocal performance group – where he continued to evolve as a performer and conductor. Meanwhile, his instructors were taking a genuine interest in his career path, even helping him create a blueprint for success.

“Adrian was a very good student; very inquisitive and invested in his education,” says Tresler, who continues to support his former student by guest-speaking at Portola High School music events. “Knowing that Adrian wanted to be a conductor and educator, we talked about the required skills early on, and tailored his study somewhat toward that goal.”

If there’s one thing a music major knows, it’s keeping time. Thanks to good advice and savvy degree planning, Rangel-Sanchez managed not only to graduate as expected, but to enter his Cal State Fullerton program with a two-year head start – and no loss of credits.

“The transition was pretty much seamless,” says Rangel-Sanchez. “There’s lots of communication and fluidity. Everything’s very clear as to what transfers.”

As far as “Mr. R” is concerned, it couldn’t have worked out better. Today, he’s inspiring the future as director of the vocal program at Irvine’s newest high school. Portola High School opened in the Fall of 2016 with a bold commitment to art and music. For students and faculty, that meant not only shiny new instruments, but a show-stopping concert venue.

Last October, the PHS choir collaborated with students from the English and Art departments to stage an original, topical musical entitled For the Children: Songs of Hope and Reflection for the Southern Border Crisis. The “politically and socially charged event” combined original perspectives with traditional and contemporary musical arrangements – such as Bob Dylan’s “Blowin’ in the Wind”—to shed light on border issues in what Rangel-Sanchez calls an “often sheltered” city.

“It was a multifaceted event -- poetry readings to give context; the art department created new artwork reflecting the situation,” says the director. “We have a high commitment to interdisciplinary projects [at PHS]. This was a really special one.”

Even in the “off-season,” there’s never a dull moment for Mr. R. As an advocate of music, in general, he strives to create an atmosphere where students at any level of musical experience can benefit. Whether he’s “doing serious, difficult repertoire” with his advanced students, or teaching the school’s star running back to carry a tune, he can’t help but feel blessed.

“It’s been rewarding,” says Rangel-Sanchez. “It’s been really diverse, which is a great thing.”

And when his students ask, he’s quick to credit his start at Irvine Valley College for clarifying his path to success. He says he’s honored to have had the opportunity to build his confidence close to home.

For IVC’s part, the feeling is mutual.

Says Tresler: “We are proud of Adrian and excited to see the excellent work that he is doing here in our own local area, educating the next generation of musicians