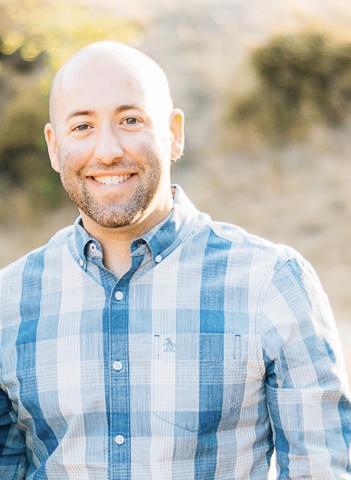 Jeff Botwin has one piece of advice when it comes to achieving an overdue goal: “It’s never too late.” And while it wasn’t easy, the IVC alum’s decision to return to college proved well worth the investment.

“Going back to school can be unnerving. It can feel like you're going backwards,” admits Botwin. “But for me, it was really enjoyable … it was something that made me happier since it was taking me in the right direction.”

Before enrolling at Irvine Valley College, Botwin graduated from the University of California, Irvine and pursued a career at a big-chain retail bank. Struggling to find passion in his position, he recognized it was time to go back to the drawing board.

“I knew I didn’t want to be in that high-pressure, forced kind of environment,” says the confident comebacker. “I knew I wanted to reinvent myself and get a new career.”

Reflecting on his time at UCI, Botwin recalled a few accounting courses he took as requirements to round out his electives. He says the pathway was unexpected, “but what I found is that I really liked it.”

With this revelation in mind, Botwin swung into action. He did his due diligence on Irvine Valley College and found that the school offered everything required for him to sit for the CPA exam. Not only could he obtain all of the required units at IVC, Botwin would have the opportunity to earn while he learned.

“IVC was great in the sense that they had classes available that were on weeknights … so I could keep working,” says the grateful grad. “It’s probably no coincidence that the class times are when they are.”

Though he admits to times when it was difficult balancing school and his personal life, Botwin’s tenacity ultimately won out.

“That’s where IVC came in,” he reflects. “It was more about being creative and finding the ‘how can I get this done?’ instead of giving up.”

Between the flexible classes, affordable price points, and engaging curriculum, IVC checked all the boxes for Botwin. However, one element had the most significant influence on his education — his professors.

“At UCI, it’s all theory-based. You would have renowned professors doing research … but they don’t have any real experience,” Botwin explains. “[At IVC] it was really nice to hear the stories … to show you what it’s really like [as] a working professional.”

One such difference-maker was Candace “Candy” Huie-Raffa. With more than 30 years of accounting experience, Huie-Raffa had plenty of wisdom to share with students like Botwin.

“Candace was still working as a tax partner to a local or regional tax firm in the area,” says the student. “You get to hear the real-world perspective of it from an actual practitioner, versus someone who just went to school and got a PhD.

“There’s nothing wrong with that, but it’s just different.”

Just as the future accountant learned from his dedicated professors, the benefit would prove mutual. Huie-Raffa says she was constantly being enlightened from students like Botwin.

“Jeff was always asking great questions, which brings out the best learning experience for the entire class and made me a better professor,” says the experienced instructor. “It’s students like Jeff that keep me wanting to come back each semester.”

The solid foundation built at Irvine Valley College helped Botwin develop the skills to sit for the CPA exam and excel in his refreshed career path.

Now, Botwin has found his footing. He’s building his career in accounting with Alexandria Real Estate Equities, an investment trust company in Pasadena. Thanks to his Laser-launched foundation at IVC, Botwin has managed to combine a passion for real estate with his love for accounting.

“It [was] cool to make that switch and get to do something you’re good at … [along] with a business you’re passionate about,” he reflects.

While unique, Botwin’s “return and reinvent” success story arc is hardly one-of-a-kind. For students looking to follow in his footsteps and find a new career path, Botwin’s advice is simply not to be intimidated.

“It’s never too late to switch your careers, or to align your skills with something new that you’re passionate about.”

Meanwhile, according to Botwin, the most important thing is to keep looking ahead. “It can feel like you’re going backwards, and it can be scary,” he says. “But sometimes you have to take one step back to take two steps forward.”