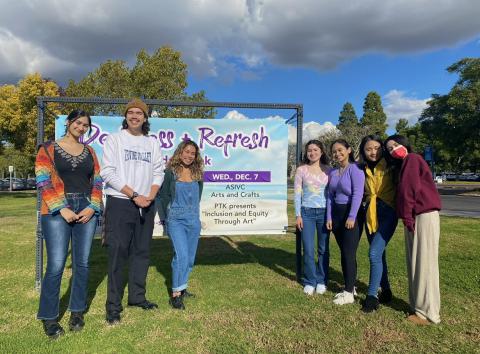 IVC’s Phi Theta Kappa (PTK) Club hosted an “Inclusion and Equity Through Art” event in the SSC quad on December 7 as part of the club’s service project. The event offered a variety of creative outlets such as chalk art, canvas painting, and rock art for students to express challenging experiences, particularly microaggressions. The project team selected the theme of the event to support IVC’s Diversity, Equity, Inclusion, and Accessibility (DEIA) efforts which is part of the college’s mission.

Spearheaded by PTK’s Co-Vice Presidents of Service, Allyson Najera and Erick Ferrufino, the students focused their project on microaggressions and finding ways to allow students to express instances where they’ve encountered them. A microaggression is a statement, action, or incident regarded as an instance of indirect, subtle, or unintentional discrimination against members of a marginalized group. Along with sharing personal accounts of experiencing microaggressions, students were also asked to create micro-affirmations.

MIT ombudsman Mary Rowe describes micro-affirmations as, “Tiny acts of opening doors to opportunity, gestures of inclusion and caring, and graceful acts of listening.” She says, “Micro-affirmations lie in the practice of generosity, in consistently giving credit to others – in providing comfort and support when others are in distress.”

Rowe suggests that by weaving micro-affirmations into our behavior, we may be able to “block” our undesirable actions or displays of microaggressions that we may not even be aware or conscious of.

“It may be hard for a person to ‘catch’ himself or herself unconsciously behaving inequitably. I may not always be able to ‘catch myself’ behaving in a way that I do not wish to behave. But if I try always to affirm others in an appropriate consistent way, I have a good chance of blocking behavior of mine that I may want to prevent.”

Allyson says the PTK event was successful in bringing attention and awareness to microaggressions and micro-affirmations.

“Overall I think the project was successful in fostering an engaging and inclusive community event that supported and highlighted student voices. My fellow Co-Vice President Erick and I were extremely happy seeing our College Project team, IVC faculty, and fellow students at the event participating in the activities and seeing our work come to life.”

The PTK team created a pamphlet including a survey which was distributed to roughly 150 attendees during the event. The survey results showed 70% of attendees reported they felt they learned more about what racial microaggressions are and learned more about the mental health resources available to them on campus. Sixty-five percent said they felt more knowledgeable about clubs on campus and more inclined to participate in them, feeling a sense of inclusion from attending the event.

Learn more about the PTK Club »