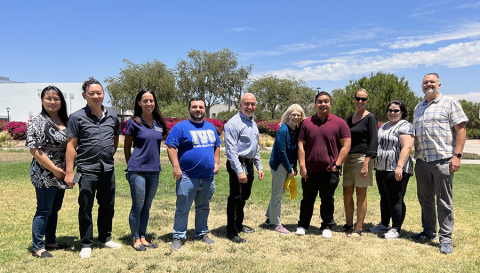 IVC’s New Media and Marketing Specialist Abner "Ace" Caguioa was recognized as the NCMPR District 6 Rising Star Award recipient. The Rising Star award recognizes newcomers who have demonstrated special creativity or ability in marketing and PR and show evidence of a promising future in the field. It is awarded annually in each of NCMPR’s seven districts, and district winners automatically qualify for consideration for the national award.

Ace, who came to IVC in October 2019, is a team builder and natural leader with experience in fast-paced environments. Ace is tech-savvy with skills in graphic design, videography, social media management, and scriptwriting. Ace brings a student-focused perspective to his work having served as a marketing coordinator and outreach counselor at California State University, Fullerton prior to coming to IVC.

Since taking over IVC’s Instagram account in October 2019, Ace has grown the number of followers by 62%. IVC’s Instagram has been cited as a model for best practices in social media management, thanks to its high-quality photos, videos, and storytelling.

He is an amazing photographer and has significantly built IVC’s Flickr account with bright, colorful photos that capture the essence of IVC’s campus community.

See all of the NCMPR District 6 Medallion Award recipients »