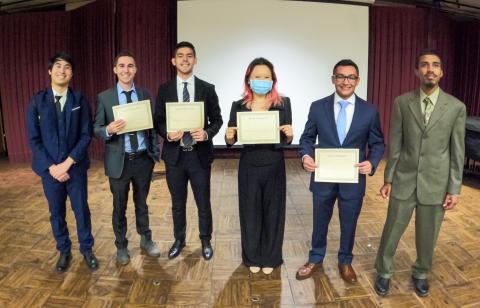 After two and a half years of virtual competition, the IVC Speech Team made its victorious return to in-person competition earlier this month at the 2022 PSCFA Warm-Up Tournament hosted by El Camino College. Fifteen colleges and universities from across Southern California and Arizona came together to compete at the event.

“After training the students to compete via Zoom for the last two years,” says Co-Director of IVC Forensics Jules French, “I have to admit that I got emotional seeing the students be able to return to speaking in public and create that bond with their teammates.”

Newcomers to the team, Anthony Carrillo and Chloe Han proved to the competition what a dominating force IVC Forensics is by going undefeated in parliamentary debate and receiving the Superior Award. To add to their success, they beat out 40 other competitors to be named the 1st and 2nd speaker. Proving that IVC excels in debate, their teammates, Diego Victorio and Austin Wagner, finished right behind them with the Excellence Award. The students debated on topics from reforming FEMA to whether globalization does more harm than good. In individual speaking events, teammate Anna Dupree came out victorious in Impromtpu Speaking and received the Excellence Award.

The team is looking forward to their next events, including the Watson-Lancer Invitational held at Pasadena City College. Those interested in joining the IVC Speech Team are encouraged to contact Jules French or Bill Neesen.