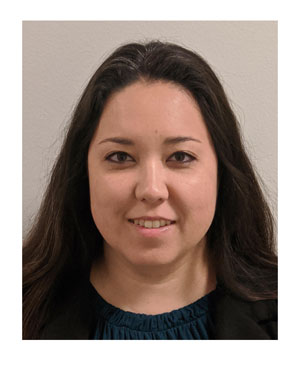 For many of us, “tax season” is a harried five-hour window between mid-afternoon on April 15 and whatever time the post office closes.

But while mere mortals wallow in piles of receipts, despairing as they scramble to organize endless forms, professionals like Colette Harnisch are enjoying every minute of it.

“The more you understand taxes, they’re not as terrible as they seem,” says the IVC graduate, currently gearing up to face her first official “tax season” as a Tax Associate at White Nelson Diehl Evans (WNDE). Harnisch says she feels energized by the fast-paced, high-stakes world of tax accounting, and in her field, such enthusiasm is essential. “It’s long hours, but I enjoy it.”

Growing up, Harnisch lived right next to Irvine Valley College, making IVC “kind of like my go-to,” she says. After high school, she spent a few semesters at IVC before pausing her studies for a higher purpose — to serve in the U.S. Marine Corps.

The sergeant was stationed at Camp Pendleton and MCAS Miramar for eight years, working as an administrative assistant and then as an avionics technician on helicopters. By the time Harnisch returned to IVC, she was ready to be a student again – and the Business Administration program was ready to welcome her.

“At IVC, you get to figure out what you want to do,” says the Irvine High School grad, who was inspired toward Accounting by the support of her professors at IVC, most notably Bennet Tchaikovsky. “It’s a good opportunity, instead of going straight to a four-year, and it’s cheaper, too!”

Harnisch quickly fell in love with the program, and it was during Tchaikovsky’s office hours that Harnisch began finding answers to her career questions.

“I can’t stress enough how much Professor Tchaikovsky helped out in saying, ‘Make sure you’re prepared [for your career] while you’re in college,’” she says. “He guided me toward firms and told me what I should expect when I transferred to Fullerton.”

By the time she transferred to Cal State Fullerton, Harnisch was more than prepared — she was ahead of the class. Later, as she geared up to attend the university’s “Meet the Firms” event, where accounting firms from all over compete for “the best of the best” student interns, she spotted a familiar face.

“I go to those Meet the Firm events to help my former students navigate through the recruiting process,” explains Tchaikovsky, an industry expert with over 20 years of experience as a CPA and chief financial officer. “It’s a good opportunity for people to get their foot in the door.”

Through the event, Tchaikovsky introduced his former student to a firm he thought would represent the perfect fit. “For Colette,” confides the professor, “I think I may have actually cut with her in line at the recruiter for White Nelson Diehl Evans.”

The introduction to WNDE went well. Harnisch received the firm’s coveted tax season internship for 2019, where she would have a chance to get a feel for the job.

“You’re definitely doing the work, and it’s a good experience,” she says about the internship. And the best part?

“After the internship, they offered me a position, so after I graduated, I was able to get the job.”

Harnisch has since joined the ranks of professional accountants, a future-proof career path bearing an unemployment rate of just 1.4 percent — less than half the national rate, according to the U.S. Bureau of Labor Statistics. And with the American Institute of Certified Public Accountants predicting that 75 percent of its members will soon be eligible for retirement, the time to make a career crunching numbers has never been more opportune.

“There’s a huge drought in terms of finding talent,” says Tchaikovsky, who expects that demand for qualified accountants will persist for the “foreseeable future.” So, when it comes to talented IVC grads like Harnisch, firms like WNDE are thrilled to recruit.

“Colette is a super hard worker – smart, diligent, detail-oriented – everything we’re looking for,” says Candace “Candy” Huie-Raffa, a member of WNDE’s Executive Committee, IVC Foundation board member, and professor. “She’s come back with us for this tax season as associate staff and is just killing it.”

To meet demand during tax season, WNDE often takes on extra interns to help them through the crunch — and to forecast future employees. According to Huie-Raffa, IVC interns like Harnisch rise to the challenge during the stressful season, where accountants have to be flexible and are “constantly churning” out returns.

“We're all in the trenches together,” says Huie-Raffa. “And Colette is right in the mix.”

Huie-Raffa is a 30-year veteran of the accounting field, but it’s through her capacity as an IVC professor that she recognizes future talent – sometimes sitting right there in her classroom.

“I’ve had some students that were taking the CPA exam, and now, they work for me,” says Huie-Raffa. “It’s a great recruiting tool.”

The IVC ties run deep at WNDE. Huie-Raffa’s many IVC-connected colleagues include the firm’s new auditor, who was actually one of Huie-Raffa’s students.

“It’s a small world, and it is just fantastic,” says the professor.

That close network, according to Huie-Raffa, is a byproduct of IVC’s commitment to smaller class sizes. And because her firm provides students with opportunities for mock interviews and resume reviews, in addition to internships, Irvine Valley College represents the ideal training ground.

“We get to have those one-on-one relationships,” says the professor. “I’m really looking for the ability to build those relationships, give back, and help them [students] develop their careers.

“It’s amazing, the talent pool that you find there [at IVC].”

Tchaikovsky agrees, saying that he feels fortunate to have such outstanding students.

“I can teach at a much higher level, partially because we have the number one transfer rate in California,” boasts the department chair, author of two eBooks on jumpstarting accounting careers. “For students like Colette … I’m going to teach them accounting … And the second part of that is really helping them find work.”

Harnisch remains grateful for the overwhelming encouragement from IVC, and she never hesitates to let her colleagues know. In particular, she touts the one-on-one support she received from professors, counselors, and the IVC Vet Center.

As a professional, Harnisch is currently working hard to pass her CPA exam, after which she hopes to move up to a senior accounting at WNDE. And as a mother, Harnisch knows exactly where her 10-year-old son will go when he’s ready for higher education.

“I recommend people to go there because of the people that work there and helped me along the way,” says Harnisch. “I really appreciated that about IVC.”