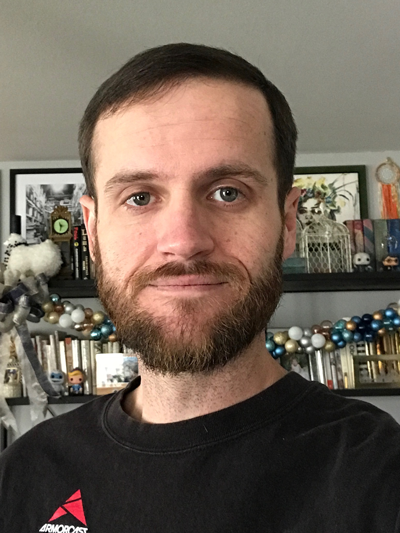 Talk about taking off with electrical work — for IVC Veteran student Kenneth Usher, following his passion began with missile launchers and radar stations.

“Our task was to set up a site that was capable of defending the skies,” says Usher, who would help run around-the-clock operations as a patriot enhanced missile station operator in the Army. “We had to be super careful,” he recalls. “If you load it wrong and you hit the missile can against the truck or the trailer, it could set it off!”

Toward the end of his Army career, Usher got into system maintenance and would troubleshoot the launchers if they weren’t moving correctly.

“I would take this big testing machine down to the launcher…and I would figure out what parts I would need to replace,” Usher recalls, who enjoyed the challenge of making things work properly, one of the crucial skills he would later use in electrical technology.

After the Service, Usher was employed by a communications company, working with fiber optic cables and laying down lines for corporations like Verizon and Sprint. He enjoyed wiring things up and making sure it all worked, but after seven years, he found himself wanting more.

“I was looking to get into the nitty-gritty of what it all really meant and how it actually works,” relates Usher.

That’s when a lightbulb went off — or in this case, the lights on a billboard. Usher worked near Irvine Valley College, and one day as he drove by, he saw an advertisement for the college’s Electrical Technology Program, and sparks started flying.

“I took a little bit of time off of work, went to the school, and talked to the Vet Center,” says Usher, who was met with incredibly supportive staff. “They got me good with my benefits and then pointed me in the right direction.”

“It was actually super easy to get started.”

Usher is extremely thankful to the Veterans Center for not only setting him up for success but also for continuing to support him throughout his academic journey.

“The Vet Center is great. I walk in and have a question, and they’ll get you sorted fast,” he says. Everyone is friendly and eager to help. “There are always like five or six people in there ready to just answer your question,” Usher says, who relates that the center has everything he needs. He’s especially looking forward to utilizing the Vet Center’s student services. “Coming up in the next semesters, I'll be moving up to trigonometry and things I've never learned before. I will definitely be in there for the tutoring and everything.”

“It’s a great program there,” he says about the Vet Center, where Usher also enjoys meet and greets, free food, and even free school supplies at the start of every year. “They’re amazing.”

Usher has been a student at IVC for about a year and a half, and he has earned the Electrician’s Certification for the State of California. He is also taking classes in the Electrical Technology Program and is now working toward the Electronic State Certificate.

“And then I'm also going for the Associate in Science for Electrical Technology,” says Usher, who’s having a blast advancing his skills and his education.

One of the best parts of the program, according to Usher, is the professors. He has an especially good rapport with Dr. Massimo Mitolo. Right now, he’s taking all of Mitolo’s Electrical Tech classes.

“I think his courses are great,” says Usher. “He’s always asking me questions on where I’m headed and what I’m reading.

In fact, Mitolo was recently named an Institute of Electrical and Electronics Engineers (IEEE) Fellow for 2020, the highest grade of membership and a prestigious honor. Mitolo has written over 120 journal papers and three books, and he has received numerous recognitions and best paper awards. And Usher is thrilled to be able to take his classes.

“He’s a genius!” Usher says about Mitolo, who relates that the professor is also an amazing teacher. “Being in his classes, he really explains everything well.”

To top it all off, Mitolo is also a Veteran, and that makes all the difference for Usher. “There’s a level of camaraderie between all Veterans,” says Usher. “It makes you feel at home.”

To hear Mitolo tell it, “Mr. Usher, an Army Veteran, is a dedicated student of my Electrical Technology Program with a passion for engineering.” He’s proud of his student and happy to support him and even swap stories from the Service from time to time. Mitolo is committed to helping Usher and every IVC student feel welcome.

”As a former Army officer, I do understand the challenges of transitioning to civilian life,” Mitolo states. “My classroom is a safe space, and I do promote an accepting, supportive, and diverse learning environment for all students.”

And Usher couldn’t agree more. “He's really personable, and his classes are fun,” he says about his professor.

One of his favorite classes taught by Mitolo is Intro to Renewable Energy, an area that Usher is particularly interested in.

“There’s a lot of intricate math behind it. It teaches you about all the different types of renewable energy across the world, all the different geothermal plants and the wind energy farms in [places] like Denmark.” Usher is playing with the idea of becoming a solar technician and maybe even working for a company like Tesla one day, so he says the class is “very informative for renewable energy, especially since that’s where the future is headed.”

And speaking about the future, Usher has a lot of career possibilities that are taking off for him. He’s considering returning to the communications company he used to work for and using his new skills in their fabrication shop to help make communication housings. He’s also interested in building circuit boards. “I actually have my own soldering gun,” Usher says, who relates he’s been trying it out. There’s also the possibility of transferring to the University of California Irvine for his bachelor’s. Right now, he wants to explore all the different options available to him in the field.

And at IVC, he’s continually exposed to exciting possibilities, expanding his idea of what he thought was possible.

“Every day in the IDEA [School of Integrated Design, Engineering and Automation] building, there’s something new and different I’m learning about,” says Usher. He’s been checking out the classes in engineering, CAD, and 3D modeling and printing.

“They also have a metallurgy course where you can melt your own metals and make your own molds!” he says. “There are a lot of cool, different programs in that building.”

Usher aims to graduate in 2022, but he doesn’t want to focus on a destination — he’s more concerned with embracing the journey and learning everything he can to skyrocket his skills and his career to the next level. And having a great time while he does it!

“I love IVC,” he says. “The programs are great. Everything is easy to get to. And they make it fun.”