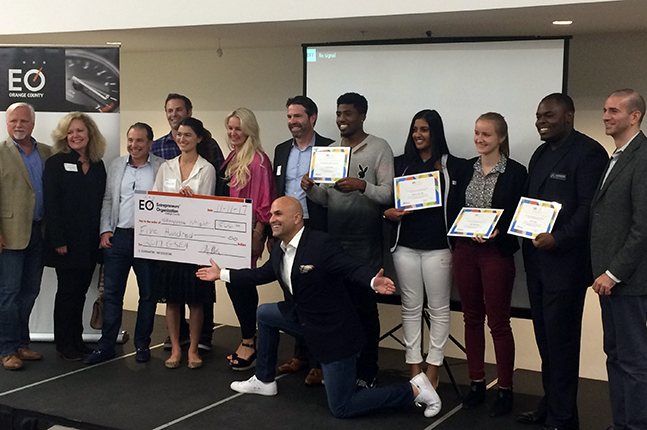 Irvine Valley College (IVC) business student Maryam Edah-Tally earned second place in the regional Global Student Entrepreneur Awards (GSEA) competition on November 11. Maryam was the only community college student to qualify for the competition, which is for student entrepreneurs who actively run a business. The competition is hosted by the Entrepreneurs’ Organization, a global peer-to-peer network exclusively for entrepreneurs.

Maryam competed against student entrepreneurs from Chapman University, Hope International University and Azusa Pacific University. Her e-commerce business, Fleur À Cheval, launched in March 2016. Fleur À Cheval designs and sells floral accessories and jewelry for equestrians and horses. It became a hit in Europe two months after the launch. Maryam has since hired over 50 brand ambassadors from all over the world to promote her brand.

In June, Maryam was awarded a $2,000 scholarship from the accounting firm Ernst & Young for being named the 2017 Youth Entrepreneur for Orange County. Currently in her second year of study at IVC, Maryam plans to transfer to the University of California, Irvine next fall. She plans to study business.

“Being an active competitor in business competitions is what fuels my passion as a teen entrepreneur,” says Maryam. Two weeks after the competition, Maryam was offered an internship and side-by-side mentoring with the CEO of Sports 1 Marketing, Dave Meltzer and his business partner, NFL Hall of Fame Quarterback Warren Moon. Maryam says, “Working with Dave and Warren is the next big thing. My entire life is about to change as a result of the Entrepreneurs’ Organization.”

Dave Meltzer, who is the 2016 Forbes Top Ten Keynote Speaker, will be speaking to IVC’s Business Leaders Society on December 6. The event takes place at IVC’s Live Oak Terraces, outside the Performing Arts Center and begins at 3 p.m. Register to attend here.