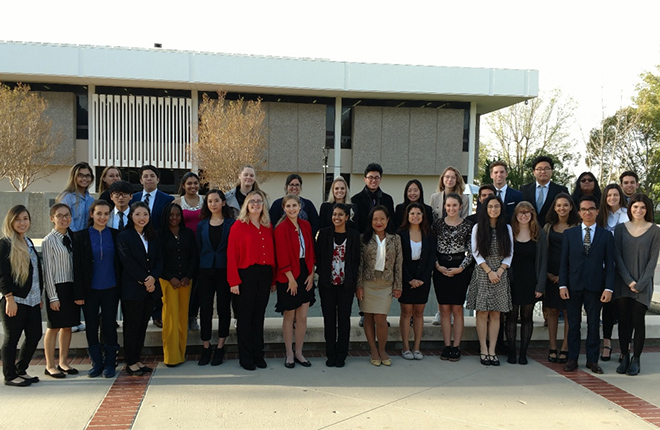 The Irvine Valley College (IVC) Speech and Debate Team finished off its busy season by competing in the 2017 Pacific Southwest Collegiate Forensics Association (PSCFA) League Championships in early December.The annual tournament, held at Moorpark College this year, was the largest that IVC participated in this semester with 37 community colleges and universities in attendance and almost 1,000 entries in the tournament.

The IVC Speech and Debate Team had a strong presence at the tournament as 52 IVC students attended the invitational to participate in a wide range of speech events including debate, impromptu and extemporaneous speaking, and oral interpretation of literature. At the end of the grueling tournament, IVC students brought home 17 awards.

"Many of our awards were in debate and limited preparation events," said Director of Forensics Jules French. "What makes me so proud of our students is that these speeches require them to think quickly and give an articulate speech after less than 30 minutes of preparation. Taking home 17 awards is evidence that our students are some of the best critical thinkers in our league."

The IVC debate team of Meaghan Loeffler and Katrya Ly are the top community college team in the United States. The National Parliamentary Tournament of Excellence ranks teams for their overall performance throughout the year and currently has over 400 teams ranked from colleges and universities.

The speech team has several upcoming events in the month of January. On January 20-21, the team will compete in the Close to the Coast Speech Invitational held at Orange Coast College. The team will also compete in the Janesse Davidson Memorial Tournament at Concordia University Irvine January 27-28. Those interested in joining the speech and debate team are encouraged to contact Co-Directors of Forensics, Jules French, wneesen@ivc.edu.