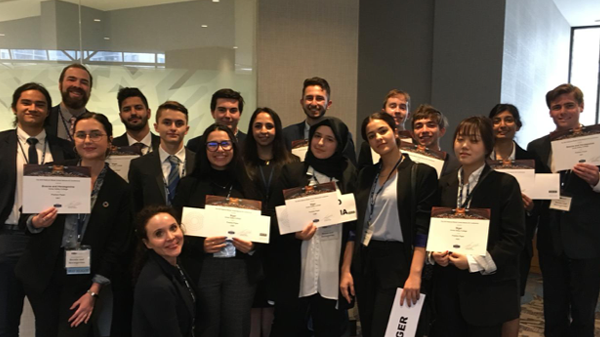 ​​​While in the capitol, the students also had meetings with the staffs of Representative Katie Porter, Senator Dianne Feinstein, and Senator Kamala Harris. They engaged in dialogues with the congressional staffers about their experiences at IVC and how the federal government can help students bridge equity gaps by advancing college affordability and supporting experiential learning programs like MUN in California community colleges and nationwide.

Although the recognition of excellence bestowed by the awards is a great honor, the real reward lies in the personal and academic growth opportunities that this experience provides. Student delegates participating at MUN conferences have the unique opportunity to develop leadership, public speaking, negotiation, and multicultural skills.

Student Tomas Castro says, “The NMUN DC Conference was absolutely formative for me. Putting into practice what I had learned about foreign policy in the classroom brought to life the issues my generation faces today, and resolving them through constructive diplomatic efforts gave me hope that solutions to them can indeed be found. After making so many friends at the conference itself, I found it difficult to say goodbye.”

Prior to attending the conference, IVC MUN students developed position papers on key issues such as women’s empowerment and sustainable development, preventing marine plastic pollution, and Israeli settlements in the Palestinian territories, among others. At the conference, students simulated the workings of the actual UN by advocating and negotiating for the interests of their country in committee meetings. Additionally, by engaging with students from different countries, IVC MUN student delegates worked across cultural and linguistic differences, experiencing a multicultural learning opportunity like no other.