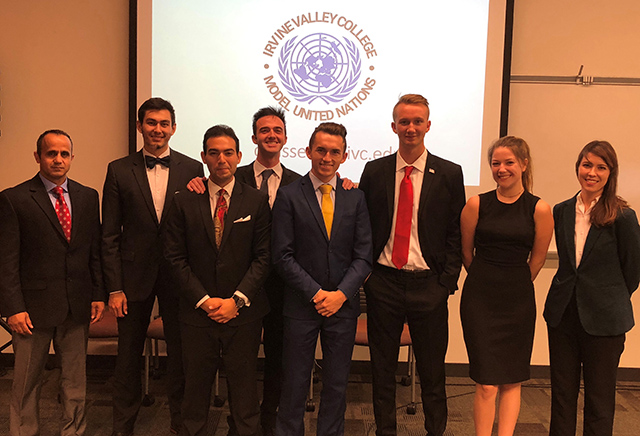 On November 30, the Irvine Valley College (IVC) Political Science Club and Model United Nations (MUN) program hosted their ninth Global Policy Forum (GPF) at IVC for a packed audience. Over 100 students attended the event that looked at the issue of securing America’s national interest. Two teams of IVC students from the Political Science Club debated the topics of America First vs. Globalism, as well as whether the Iran Nuclear Agreement was a good or bad deal. The audience, comprised of IVC students, had the opportunity to interact in the debate by posing questions to the debaters and vote for the team that they thought presented the best case.

The event is the first of three service-learning events that the IVC Political Science Club organizes each year to help raise awareness about policy changes, promote global citizenship, and encourage constructive dialogue on controversial issues. Club members and the IVC MUN team spent over 25 volunteer hours organizing logistics and preparing for the event by researching and developing arguments to showcase the different sides of the topic. The IVC community at-large is welcome to attend the debates as a way to help connect IVC MUN and Political Science Club members with others in the community, and also encourage academic success, creative expression, personal growth, diversity, student advocacy, and leadership.

For more information on the Political Science Club or Model United Nations at IVC, contact Professors Shirin Sahani at ssahani@ivc.edu or Tom Klein at tklein6@ivc.edu.